Events News Public News
20
October
Date:   Thurs. Oct. 21st  from 07:30 to 09:00.Venue: The Bristol Port Company, Avonmouth Road, Avonmouth. BS11 9DQHost:   The Bristol Port Company Come and join us to hear from the Bristol Port senior management about the latest on Brexit, Port congestion challenges across the UK and 5G roll out.We are delighted to invite you to our first face-to-face business breakfast since Feb 2020, and once again enjoy sharing breakfast sarnis and the all important networking contacts and conversations.We’ll be sharing what we have achieved by working together over the last 12 years and discussing how we take this forward, together with the Portbury Avonmouth Severnside Transport Charter. Please join us for October’s Business Breakfast We’re being hosted by The Bristol Port Company in their Presentation Suite. It’s a familiar venue for our breakfasts.Close to Avonmouth Station its very accessible by bus, train, bike and car. We’ll be sharing what we see as priorities for the next five years, and we want your views.We’ll also discuss how we can ensure SevernNet’s sustainability over the next decade, and we’ll be revealing our new logo and website. We look forward to seeing you on Thursday morning, 21st October

Posted by SevernNet
Circular Economy Energy Members News Public News Sharing Practice Transport
20
October
Two new large recycling vehicles – which are powered entirely from the food waste they collect – have launched to service cafés, restaurants, schools, and offices across the West. They are the latest addition to the expanding fleet of ‘Bio-Bees’, which have served Bristol since 2017, and have been affectionately nicknamed Buzz Lightyear and Buzz Aldrin by the public, following a poll by their creators at renewable energy and recycling company, GENeco. The two newcomers are being deployed wider across Bristol, Bath and North East Somerset, North Somerset, South Gloucestershire, and South Wales. The food waste collected by the Bio-Bees is taken to GENeco’s anaerobic digestion facility in Avonmouth, where it is turned into clean biomethane fuel used to sustainably power local homes and – in a UK first – the Bio-Bees themselves, reducing their wheel-to-wheel carbon dioxide and particulate matter emissions by over 90%, than if they were to be powered by diesel. Francis Marsh, head of liquid waste resources at GENeco, said: “Following the success of our Bio-Bees operating in Bristol and the positive changes they have made to the local environment, we are really excited to expand the service to collect and recycle food waste from more businesses across a larger region. “Every year an estimated 20 million tonnes of greenhouse gases are released into the atmosphere across the UK from food waste that is sent to landfill to rot, instead of being recycled. The Bio-Bees allow us to harvest the valuable energy and nutrients in food waste and use it to power homes and vehicles in a more sustainable and ethical way.” GENeco notes that, following the momentum generated by the recent IPCC report and the successful bid for Bristol to be named a Gold Sustainable Food City, businesses with foodservice facilities are more interested than ever in being sustainable, carbon-neutral and sending less waste to landfill. 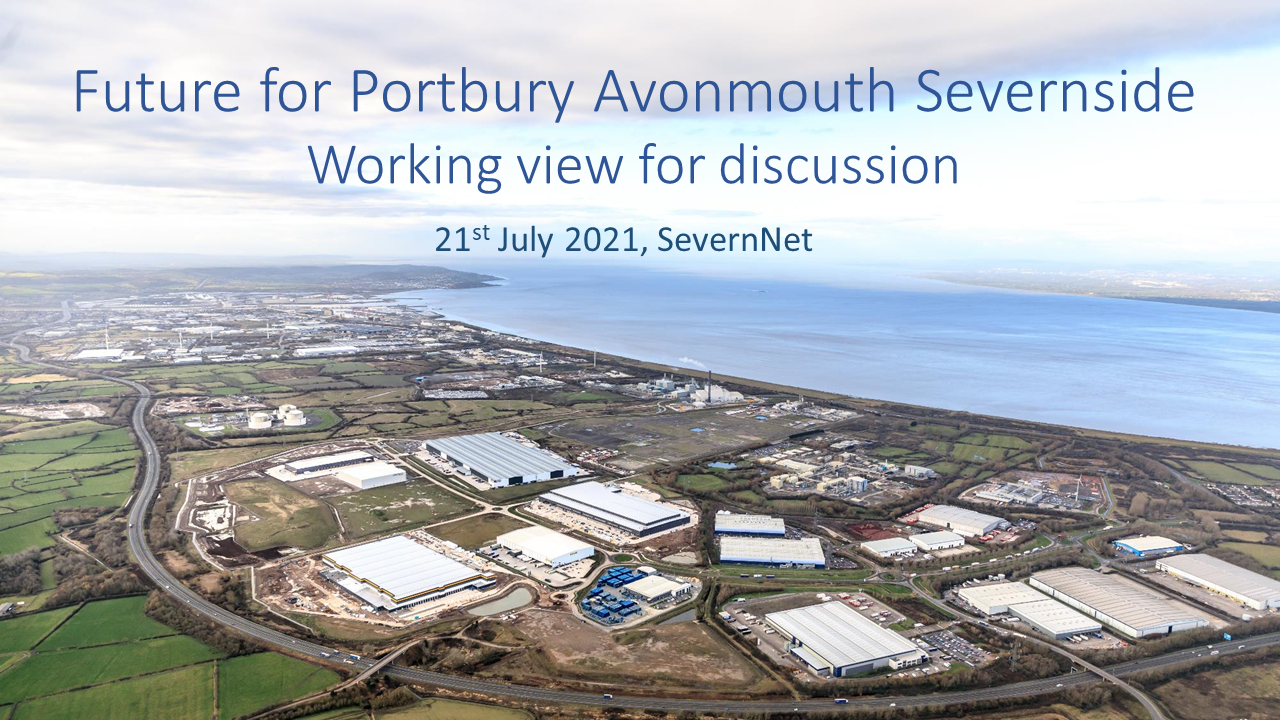 Circular Economy Community Economy Employment Events Jobs Members News Public News Skills Transport Uncategorised
11
August
July Business Breakfast – Thurs. Jul. 22nd 2021 from 08:00 to 09:00. We were delighted to be joined by Stephen Peacock. Stephen is an Executive Director at Bristol City Council responsible for Regeneration & Growth. We’d like to offer our thanks once again to Stephen for taking the time to join us. It was much appreciated. We hope that the event has helped understanding of the area and of the opportunities we all have to work together; and we look forward to further discussion. SevernNet presented a ‘Future for Portbury Avonmouth Severnside’. We welcome any comments or thoughts you may have on this; and would like to use it as a basis for developing a collaborative shared vision and for discussion around place making. Do please get involved and get in touch (info@severnnet.org). We discussed the Bristol One City Economic Recovery and Renewal strategy which was published in October last year. Here’s a link. This includes Avonmouth as one of Bristol’s seven priority places. The aim is to develop an area based economic strategy for Avonmouth which maximises the locational advantages and sectoral strengths It’s good to see that there are many shared goals and aspirations between the SevernNet presentation and the strategy above; and the recognition that more needs to be done to break down some of the silos created by local authority (LA) boundaries, and within LAs themselves. We need to see better integration between the needs of Transport, Employment & Skills and Circular Economy and how they can come together to support placemaking and strengthening the community. Progressing the Portbury Avonmouth Severnside Transport Strategy must also be seen as a priority, along with the M49 Junction, and the need for orbital as well as radial routes to support the area. Please follow up with us if you would like to discuss further and/or get more involved; and thanks to everyone who attended for a very worthwhile event. The next Business Breakfast is on Thursday September 23rd. Our guest will be Dan Norris, the newly elected Mayor of the West of England Combined Authority (WECA). The link to sign up is here. Please join us.

Posted by SevernNet
Economy Employment Jobs News Public News Skills
26
July
One of the best business decisions I have made in recent years was to hire an apprentice.Weston College: “We’re seeing increased demand from employers looking to build their team for the future, so we’ve committed to creating 300 apprenticeships in just 100 days.” For more information contact Dave Crew at Weston CollegeWhy not upskill a current employee?Anyone can be an apprentice, even if they are already employed by you. By upskilling current staff, you can eliminate the cost of recruiting and training someone new and allow current employees to gain new skills and knowledge and keep your staff motivated, as well as promoting internal progression and reducing staff turnover.For more information contact Simon Arnold at City of Bristol CollegeGift your apprenticeship levyApprenticeship levy transfer is an excellent way to encourage potentially lost Apprenticeship funding to stay or be imported locally.For more information contact Steve Gale at Western Training Providers Network Workforce for the Future … see separate post

Posted by SevernNet
Economy Employment News Public News Skills
26
July
Get support from the West of England Combined Authority’s expert partners to ensure your business can identify ongoing skills needs, unlock opportunities, drive change and invest in your current and future workforce.  Workforce for the Future is a free service that gives you free tailored, in-depth support to help your business plan and adapt both now and for the future. What will I get? 1. Workforce development planning2. Access to training such as digital skills development3. Access to new resource such as apprentices, interns or work placements4. Talent retention strategy5. Strategic planning and guidance on change management6. Access to education and skills pathways  Download the brochure for more information or visit the West of England Growth Hub for more information and to arrange a call-back.  Alternatively please follow the Combined Authority’s business support service the West of England Growth Hub on Twitter and/or LinkedIn, where you can easily share any and all posts relating to this programme and our other services.

Posted by SevernNet
Employment News Public News Severn Ride & Stride Transport
26
July
From GWR …From Monday 26th July, our Bristol to Weston services will be cancelled on weekdays and Saturdays. We will be putting in additional stops on our local services to ensure stations on this line are still served. We will also be removing two journeys in each direction from Bristol Parkway to London Paddington. An hourly service will remain on this route throughout the day.For clarification Bristol-Weston local services will not run, instead our Bristol-Taunton services will call additionally at stations between Bristol and Weston. Our High Speed train services between London-Weston/Taunton will continue to operate as planned. We will make customers aware of these changes through our website, media, station posters, on board announcements and have liaised with Network Rail to update journey planners as quickly as possible so that the correct timetable is available through online journey planners by Saturday morning.  We will also be contacting customers directly where they booked online and will be offering customers with Advance purchase tickets the opportunity to use their tickets on the nearest alternative services, or offering full refunds. Making these changes now will mean that we can reduce ad hoc, last minute cancellations, helping customers to better plan for their journey.   We are continuing to monitor the situation with test and trace and will restore these services as soon as we can.Please also see item below relating to impact of the Bristol Rail Regeneration programme and disruptions.